Pfizer could start manufacturing Paxlovid in China through a local partner within three to four months of Beijing taking steps to provide the necessary permits to produce and supply the Covid-19 drug in the country.

Albert Bourla, chief executive of Pfizer, said on Monday that a local contractor was preparing to start production as demand for oral antiviral treatment soared amid supply shortages in China. Pfizer signed an agreement with Zhejiang Huahai last year to produce Paxlovid to meet the needs of Chinese patients.

“We had calculated that it would take us until the end of the year to be able to have local manufacturing, but with the progress I see and the effort of the Chinese authorities to eliminate production, it will happen much sooner”, Bourla said at the JPMorgan Healthcare Conference in San Francisco.

“I wouldn’t be surprised if it happened in three, four months,” he added. Shares of Zhejiang Huahai rose 7.7% in Shanghai on Tuesday.

Pfizer is increasing Paxlovid shipments to China from its own manufacturing sites outside the country to address a severe drug supply shortage.

Bourla said Pfizer only provided a few thousand courses of Paxlovid to China in 2022. That rose to millions of courses in December and the first week of January, he added.

China’s National Health Care Safety Administration said on Sunday it would not include Paxlovid in a list of drugs covered by basic medical insurance because of the high price quoted by Pfizer.

However, Paxlovid will be covered by medical insurance until March 31 under an emergency agreement.

The sudden reversal of Beijing’s zero Covid policy last month has caused a spike in infections across the country, and doctors have complained about shortages of Paxlovid. Prices for the drug have skyrocketed in private markets.

Paxlovid, which is usually prescribed to treat mild to moderate Covid cases, is the only foreign Covid drug approved for use in China. Other topical remedies have been approved, but experts said Paxlovid remains the medical community’s preferred drug based on clinical evidence of its effectiveness.

Bourla said reports that Beijing was negotiating with Pfizer to allow local manufacturers to produce generic versions of the drug for distribution were not correct. He added that negotiations with the public health insurer to agree a further price reduction from April 1 had not been successful.

Bourla said Beijing wants a further reduction in the price, which is already lower than that paid by many middle-income countries under Pfizer’s three-tier pricing program.

“They are the second highest economy in the world,” he said. “And I don’t think they should pay less than El Salvador, it’s true, which is a poor country.” 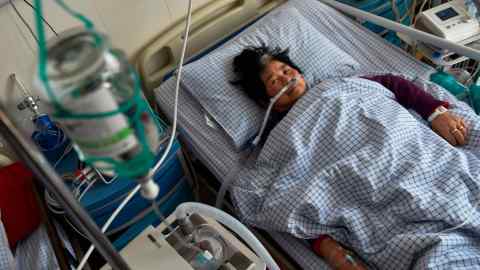 Bourla said talks are continuing, but if no agreement is reached, Pfizer will continue to sell Paxlovid in the private market in China after April 1.

Bruce Liu, who heads the life sciences division for China at consultancy Simon-Kucher & Partners, said it was unlikely Beijing and Pfizer could strike a pricing deal.

“The two parties are too far apart in the negotiations. From the Chinese government’s perspective, the budget impact will be huge due to the huge population that needs this drug,” he said.

Liu said Pfizer would not want to “damage the integrity of its global pricing” by lowering the price for China. “Pfizer cannot sacrifice the global market for China,” he added.